A special technique for handling unbalanced three-phase systems is the method of symmetrical components, which is beyond the scope of this text

Make sure to read what is three-phase circuit first.

After we learn about three phase circuit, we will learn:

This topic would be incomplete without mentioning unbalanced three-phase systems.

An unbalanced system is caused by two possible situations: (1) the source voltages are not equal in magnitude and/or differ in phase by angles that are unequal, or (2) load impedances are unequal.

To simplify the analysis, we will assume balanced source voltages, but an unbalanced load.

Unbalanced three-phase systems are solved by the direct application of mesh and nodal analysis.

Since the load is unbalanced, ZA, ZB, and ZC are not equal. The line currents are determined by Ohm’s law as

This set of unbalanced line currents produces current in the neutral line, which is not zero as in a balanced system.

In a three-wire system where the neutral line is absent, we can still find the line currents Ia, Ib, and Ic using mesh analysis.

As mentioned earlier, in long-distance power transmission, conductors in multiples of three (multiple three-wire systems) are used, with the earth itself acting as the neutral conductor.

To calculate power in an unbalanced three-phase system requires that we find the power in each phase.

The total power is not simply three times the power in one phase but the sum of the powers in the three phases.

Using Equation.(2), the current in the neutral line is

Solution:
(a) We use mesh analysis to find the required currents. For mesh 1, 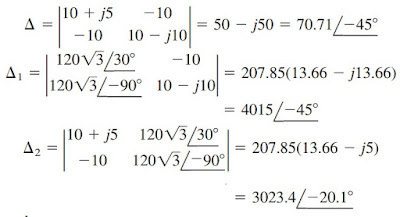 The mesh currents are

The line currents are

(b) We can now calculate the complex power absorbed by the load. For phase A,

The total complex power absorbed by the load is

(c) We check the result above by finding the power supplied by the source. For the voltage source in phase a,

For the source in phase b,

For the source in phase c,

The total complex power supplied by the three-phase source is

showing that Ss + SL = 0 and confirming the conservation principle of ac power.