There are four types of three phase circuit:

Three-phase voltages are often produced with a three-phase ac generator (or alternator) whose cross-sectional view is shown in Figure.(1). The generator basically consists of a rotating magnet (called rotor) surrounded by a stationary winding (called the stator).

Make sure to read what is three-phase ac circuit first.

Three separate windings or coils with terminals a-a’, b-b’, and c-c’ are physically placed 120o apart around the stator.

Terminals a and a’, for example, stand for one of the ends of coils going into and the other end coming out of the page.

As the rotor rotates, its magnetic field “cuts” the flux from the three coils and induces voltages in the coils.

Because the coils are placed 120o apart, the induced voltage in the coils are equal in magnitude but out of phase by 120o like shown in Figure.(2).

Let us consider the wye-connected voltages in Figure.(3a) for now. The voltages Van, Vbn, and Vcn are respectively between lines a, b, and c, and the neutral line n.

If the voltage sources have the same amplitude and frequency ω and are out of phase with each other by 120o, the voltages are said to be balanced. This implies that

Balanced phase voltages are equal in magnitude and are out of phase with each other by 120o.

Since the three-phase voltages are 120o out of phase with each other, there are two possible combinations. One possibility is shown in Figure.(4a)

and expressed mathematically as

where Vp is the effective or rms value. This is known as the abc sequence or positive sequence.

In this phase sequence, Van leads Vbn, which in turn leads Vcn.

This sequence is produced when the rotor in Figure.(1) rotates counterclockwise. The other possibility is shown in Figure.(4b)

and is given by

This is called the acb sequence or negative sequence. For this phase sequence, Van leads Vcn, which in turn leads Vbn.

The acb sequence is produced when the rotor in Figure.(1) rotates in the clockwise direction.

The phase sequence is the time order in which the voltages pass through their respective maximum values.

The phase sequence is determined by the order in which the phasors pass through a fixed point in the phase diagram.

In Figure.(4a), as the phasors rotate in the counterclockwise direction with frequency ω, they pass through the horizontal axis in a sequence abcabca . . . .

Thus, the sequence is abc or bca or cab. Similarly, for the phasors in Figure.(4b), as they rotate in the counterclockwise direction, they pass the horizontal axis in a sequence acbacba . . . .

This describes the acb sequence. The phase sequence is important in three-phase power distribution.

It determines the direction of the rotation of a motor connected to the power source, for example.

Like the generator connections, a three-phase load can be either wye-connected or delta-connected, depending on the end application.

The neutral line in Figure.(5a) may or may not be there, depending on whether the system is four- or three-wire. (And, of course, a neutral connection is topologically impossible for a delta connection.)

A wye- or delta-connected load is said to be unbalanced if the phase impedances are not equal in magnitude or phase.

A balanced load is one in which the phase impedances are equal in magnitude and in phase.

For a balanced wye-connected load,

where ZY is the load impedance per phase. For a balanced delta-connected load,

where ZΔ is the load impedance per phase in this case.

The table below shows us the summary of phase and line voltages/ currents for a balanced three-phase system: 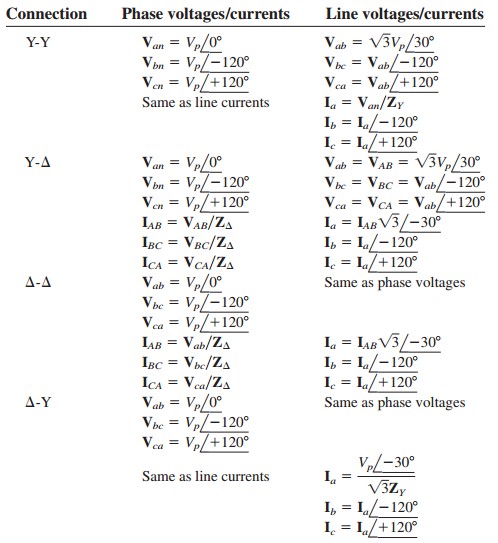 In subsequent sections, we will consider each of these possible configurations.

This is due to the ease with which loads may be added or removed from each phase of a delta-connected load.

This is very difficult with a wye-connected load because the neutral may not be accessible.

On the other hand, delta-connected sources are not common in practice because of the circulating current that will result in the delta-mesh if the three-phase voltages are slightly unbalanced.

Determine the phase sequence of the set of voltages

Solution :
The voltages can be expressed in phasor form as