Mutual inductance and dot convention will be used when we analyze a circuit that has multiple coils in close gap such as transformer.

After we learn about the linear transformer, we will have some important explanation such as:

The circuits we have considered so far may be regarded as conductively coupled because one loop affects the neighbouring loop through current conduction.

When two loops with or without contacts between them affect each other through the magnetic field generated by one of them, they are said to be magnetically coupled.

The transformer is an electrical device designed on the basis of the concept of magnetic coupling. It uses magnetically coupled coils to transfer energy from one circuit to another.

Transformers are key circuit elements. They are used in power systems for stepping up or stepping down ac voltages or currents.

They are used in electronic circuits such as radio and television receivers for such purposes as impedance matching, isolating one part of a circuit from another, and again for stepping up or down ac voltages and currents.

We will begin with the concept of mutual inductance and introduce the dot convention used for determining the voltage polarities of inductively coupled components.

Based on the notion of mutual inductance, we then introduce the circuit element known as the transformer.

Finally, among their important applications, we look at transformers as isolating and matching devices and their use in power distribution.

When two inductors (or coils) are in close proximity to each other, the magnetic flux caused by the current in one coil links with the other coil, thereby inducing a voltage in the latter.

This phenomenon is known as mutual inductance.

Let us first consider a single inductor, a coil with N turns. When current i flows through the coil, a magnetic flux ϕ is produced around it in Figure.(1).

According to Faraday’s law, the voltage v induced in the coil is proportional to the number of turns N and the time rate of change of the magnetic flux ϕ; that is,

But the flux ϕ is produced by current i so that any change in ϕ is caused by a change in the current.

Hence, Equation.(1) can be written as

which is the voltage-current relationship for the inductor. From Equations.(2) and (3), the inductance L of the inductor is thus given by

This inductance is commonly called self-inductance because it relates the voltage induced in a coil by a time-varying current in the same coil.

Now consider two coils with self-inductance L1 and L2 that are in close proximity with each other Figure.(2).

For the sake of simplicity, assume that the second inductor carries no current.

The magnetic flux ϕ1 emanating from coil 1 has two components: one component ϕ11 links only coil 1, and another component ϕ12 links both coils.

Although the two coils are physically separated, they are said to be magnetically coupled.

Since the entire flux ϕ1 links coil 1, the voltage induced in coil 1 is

Only flux ϕ12 links coil 2, so the voltage induced in coil 2 is

Again, as the fluxes are caused by the current i1 flowing in coil 1, Equation.(6) can be written as

M21 is known as the mutual inductance of coil 2 with respect to coil 1.

Subscript 21 indicates that the inductance M21 relates the voltage induced in coil 2 to the current in coil 1.

Thus, the open-circuit mutual voltage (or induced voltage) across coil 2 is

Suppose we now let current i2 flow in coil 2, while coil 1 carries no current in Figure.(3).

The magnetic flux ϕ2 emanating from coil 2 comprises flux ϕ22 that links only coil 2 and flux ϕ21 that links both coils.

The entire flux ϕ2 links coil 2, so the voltage induced in coil 2 is

Since only flux ϕ21 links coil 1, the voltage induced in coil 1 is

which is the mutual inductance of coil 1 with respect to coil 2. Thus, the open-circuit mutual voltage across coil 1 is

We will see in the next section that M12 and M21 are equal, that is

Keep in mind that mutual coupling only exists when the inductors or coils are in close proximity, and the circuits are driven by time-varying sources.

We recall that inductors act like short circuits to dc.

From the two cases in Figures.(2) and (3), we conclude that mutual inductance results if a voltage is induced by a time-varying current in another circuit.

It is the property of an inductor to produce a voltage in reaction to a time-varying current in another inductor near it. Thus,

Mutual inductance is the ability of one inductor to induce a voltage across a neighbouring inductor, measured in henrys (H).

Although mutual inductance M is always a positive quantity, the mutual voltage M di/dt may be negative or positive, just like the self-induced voltage L di/dt.

However, unlike the self-induced L di/dt, whose polarity is determined by the reference direction of the current and the reference polarity of the voltage (according to the passive sign convention), the polarity of mutual voltage M di/dt is not easy to determine, because four terminals are involved.

The choice of the correct polarity for M di/dt is made by examining the orientation or particular way in which both coils are physically wound and applying Lenz’s law in conjunction with the right-hand rule.

Since it is inconvenient to show the construction details of coils on a circuit schematic, we apply the dot convention in circuit analysis.

By this convention, a dot is placed in the circuit at one end of each of the two magnetically coupled coils to indicate the direction of the magnetic flux if current enters that dotted terminal of the coil.

This is illustrated in Figure.(4). Given a circuit, the dots are already placed beside the coils so that we need not bother about how to place them.

Thus, the reference polarity of the mutual voltage depends on the reference direction of the inducing current and the dots on the coupled coils.

Application of the dot convention is illustrated in the four pairs of mutually coupled coils in Figure.(5).

For the coupled coils in Figure.(5a), the sign of the mutual voltage v2 is determined by the reference polarity for v2 and the direction of i1 .

Hence, the mutual voltage is −M di1/dt. The same reasoning applies to the coils in Figure.(5c) and (5d).

Figure.(6) shows the dot convention for coupled coils in series. For the coils in Figure.(6a), the total inductance is

For the coil in Figure.(6b)

Now that we know how to determine the polarity of the mutual voltage, we are prepared to analyze circuits involving mutual inductance.

As the first example, consider the circuit in Figure.(7).

We can write Equation.(20) in the frequency domain as

As a second example, consider the circuit in Figure.(8).

We analyze this in the frequency domain. Applying KVL to coil 1, we get

Equations.(21) and (22) are solved in the usual manner to determine the currents.

At this introductory level, we are not concerned with the determination of the mutual inductances of the coils and their dot placements.

Like R, L, and C, calculation of M would involve applying the theory of electromagnetics to the actual physical properties of the coils.

In this text, we assume that the mutual inductance and the placement of the dot are the “givens” of the circuit problem, like the circuit components R, L, and C.

For better understanding let us review the examples below.

1. Calculate the phasor currents I1 and I2 in the circuit of Figure.(9).

Substituting this in Equation.(1.1), we get

2. Calculate the mesh currents in the circuit of Figure.(10).

Solution:
The key to analyzing a magnetically coupled circuit is knowing the polarity of the mutual voltage.

To figure out the polarity of the mutual voltage in coil 1 due to current I2, we observe that I2 leaves the dotted terminal of coil 2.

Since we are applying KVL in the clockwise direction, it implies that the mutual voltage is negative, that is, −j2I2.

Similarly, to figure out the mutual voltage in coil 2 due to current I1 , consider the relevant portion of the circuit, as shown in Figure.(11b).

Applying the dot convention gives the mutual voltage as V2 = −jI1 . Also, current I2 sees the two coupled coils in series in Figure.(10); since it leaves the dotted terminals in both coils, Equation.(8) applies. 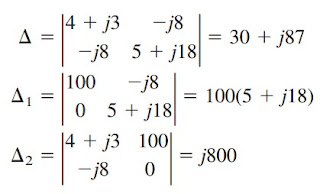 Thus, we obtain the mesh currents as