The transfer function will be

The half-power frequency, which is equivalent to the corner frequency on the Bode plot but in context of filter is known as cutoff frequency, ⍵c. This value can be obtained by setting the magnitude of H(⍵) equal to 1/√2. Hence,

If the capacitor acts as an output: 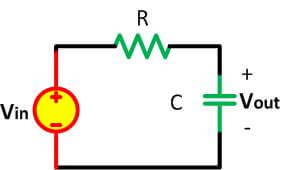 The transfer function in s domain:

If s=j⍵, then its transfer function becomes:

The magnitude of frequency response graph:

A low pass filter is designed to pass only frequencies from dc up to the cutoff frequency ⍵c.

A low pass filter can also be formed when the output of an RL circuit is taken off the resistor. There will be many other circuits to act as a low pass filter.

Keep in mind that:

Don’t worry, we will learn those two here about how we build them, their formula and characteristics.

Looking from the circuit above, we need to analyze a few things about how the circuit works exactly. The capacitor is a reactive component and provides very high resistance to low frequency signals, especially to DC signal. If you ask why, then you can read about capacitors for dc circuits. The simplest explanation can be seen from its material, a pair of dielectric plates with a small gap between them. A low frequency signal or DC signal can’t pass an open-circuit path.

But it is different for high frequency. The capacitor provides small resistance to high frequency signals. Thus from these two characteristics we can conclude that:

How to Make an RC Low Pass Filter

Using the value above, the low pass filter cutoff frequency will be:

It means that the RC low pass filter above will block the signal with 15.9KHz or more. Signals with frequency 15,9KHz and below will pass easily through the filter.

A bit different from an RC low pass filter, we will connect an inductor in series with the source and a resistor connected in parallel. The example can be seen below:

Now after we learn how an RL low pass filter works, we can move on to how to make one. For example we will use a 470mH inductor and a 10k ohm resistor. The example circuit will be:

The formula to find the low pass filter cutoff frequency will be:

Then we put the value for the inductor and resistor to get the low pass filter cutoff frequency as shown below:

It means that this RL low pass filter will block the signal with frequency 3.39KHz above and allow signals with less than 3.39KHz to pass.

The ‘loss’ produced by a passive low pass filter is called “attenuation” which can give small impact or great impact. But we can solve it with amplification from an Active Filter.

When we get the active filter then it will have an active element in the circuit. The active element can be an operational amplifier, FET, MOSFET, IGBT, or even simple transistor. These elements are used to amplify the output signal using external power.

Amplification of a filter can fix the waveform, frequency response, adjust the bandwidth, or adjust the output signal. After all the examples we can conclude that “amplification” is the main business here.

Check the circuit below:

What is the bad thing for this configuration? The main issue is its gain is never more than one. Even the maximum voltage gain is only one, the power gain is very high because the output impedance is lower than input impedance. If we need the gain more than unity then we can use the circuit below.

Check the circuit below: 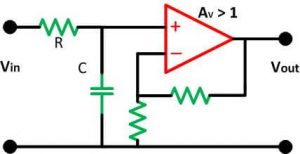 This circuit will provide both RC low pass filter frequency response along with its increased output amplitude by the gain Av. For a non-inverting op-amp, the voltage gain will be:

Hence the gain formula for an active low pass filter in frequency domain will be:

Av = gain of the filter

There will be three operations of active low pass filter from the gain formula above:

We can change the equation above into dB value:

We can put a simple example just like below:

Then we can use the Gain equation below:

n = number of order or stages

Frequency equation for second order low pass filter is given by

n = number of order or stages