This principle of conservation of power applies to ac circuits as well as to dc circuits. 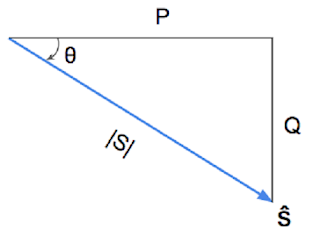 Make sure to read what is ac circuit first.

To see this, consider the circuit in Figure.(1a), where two load impedances Z1 and Z2 are connected in parallel across an ac source V.

The complex power supplied by the source is (from now on, unless otherwise specified, all values of voltages and currents will be assumed to be rms values)

where S1 and S2 denote the complex powers delivered to loads Z1 and Z2, respectively.

If the loads are connected in series with the voltage source, as shown in Figure.(1b), KVL yields

The complex power supplied by the source is

where S1 and S2 denote the complex powers delivered to loads Z1 and Z2, respectively.

This means that the total complex power in a network is the sum of the complex powers of the individual components. (This is also true of real power and reactive power, but not true of apparent power). This expresses the principle of conservation of ac power:

For better understanding let us review the examples below :
1. Figure.(2) shows a load being fed by a voltage source through a transmission line. The impedance of the line is represented by the (4 + j2) Ω impedance and a return path. Find the real power and reactive power absorbed by (a) the source, (b) the line, and (c) the load.

Solution :
The total impedance is

The current through the circuit is

(a) For the source, the complex power is

The complex power absorbed by the line is

The complex power absorbed by the load is

The real power is 1708 W and the reactive power is 1139 VAR (leading). Note that Ss = Sline + SL, as expected. We have used the rms values of voltages and currents.

Solution :
The current through Z1 is

while the current through Z2 is

The complex powers absorbed by the impedances are

The total complex power is

(a) The total apparent power is

(b) The total real power is

(c) The total reactive power is

which is the same as before.

What is Linear Transformers Circuits

Energy in a Coupled Electric Circuit

What is Mutual Inductance and Dot Convention